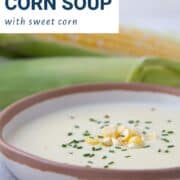 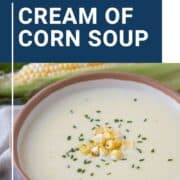 If you love corn, you have to try this Cream of Corn Soup! It’s silky and smooth, and packed with sweet corn flavor.

I was absolutely blown away by this soup. It’s creamy, silky, almost decadent, and bursting with sweet corn flavor. Cream of Corn Soup is the perfect late summer/fall soup!

This recipe is from an old church cookbook (the same one as my Old Fashioned Potato Soup!). In the front of the book, the editors highlighted a few stand-out recipes. This soup was one of them, and it’s easy to see why.

The woman who submitted this recipe shared that her mother had made Cream of Corn Soup for many years. The mother gave the daughter the recipe at her bridal shower in written form (because, of course, she had routinely made it without measuring).

Here’s what you’ll need to create the silkiest cream of corn soup:

How to make cream of corn soup

Run a knife down the cobs of corn to release the kernels. Reserve ¼ cup of corn for garnish, and chop the remaining corn finely.

Chopping the corn increases the surface area of the corn kernels that will steep in the milk, which results in more corn flavor in the soup.

Place the milk in a large saucepan over medium heat. Bring to a simmer (do not boil), whisking occasionally. You should see small bubbles on the edge of the pot.

Add the corn and onion, and let simmer for 15 minutes.

Set a colander over a large bowl, and pour the milk mixture through the colander. Strain out the corn and onions, and set aside the milk.

Place the saucepan back on the heat, and melt 4 tablespoons of the butter in it. Add the flour, and let cook for 1 minute. This creates a roux to thicken the soup.

Pour the milk into the saucepan, whisking as you pour it in. Add the salt and pepper, and let the milk mixture cook until thickened, about 5 minutes. Whisk occasionally while it is cooking.

Melt the remaining 2 tablespoons of butter, and pour it into the now-empty large bowl where the milk was. Whisk in the egg yolks.

Pour the milk mixture over the top, and stir until smooth. The hot milk will gently cook the egg yolks.

Ladle the Cream of Corn Soup into bowls, and top with the reserved corn kernels, chopped chives, and a spoonful of whipped cream (if desired).

Can I make Cream of Corn Soup ahead of time?

Cream of Corn Soup can easily be made several days in advance. Let it cool and store in a covered dish in the refrigerator.

Reheat the soup in a saucepan on the stovetop. Take care not to let it boil—just heat until warm.

I don’t recommend freezing the soup, which will compromise the silky texture.

This soup can easily be made with frozen or canned corn instead of fresh sweet corn. Instead of 5 ears of corn, replace it with: 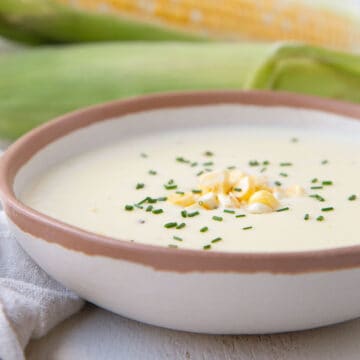 If the milk becomes too hot, it’ll form a skin on the surface. Just use a spoon to skim it off. You can substitute 2 (12 oz) bags of frozen corn or 2 (15 oz) cans of whole kernel corn for the sweet corn. Defrost the frozen corn and drain the canned corn if using. Make it ahead: let the soup cool and store in the refrigerator. Re-warm on the stovetop. You can make the soup up to several days in advance. I don’t recommend freezing the soup.