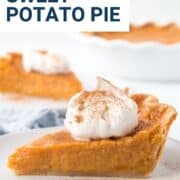 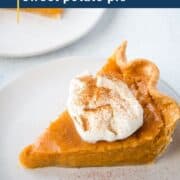 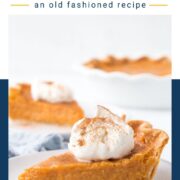 Sometimes, simple is best. And that’s definitely the case with this old fashioned pie.

I love topping it with whipped cream and a light dusting of cinnamon.

How to make the best old fashioned sweet potato pie

Start by pricking the sweet potatoes all over with a fork. Bake for 55–65 minutes in a 350°F oven, or until you can easily insert a knife into the center. Let cool for 15 minutes.

If you’re using store-bought pie crust, remove it from the refrigerator now, in order to give it 15 minutes at room temperature before unrolling.

Remove the skins from the sweet potatoes (they should slide right off), and place the potatoes in a large bowl.

Use a hand mixer or a stand mixer to mash the potatoes until smooth. Measure out 2 cups, and set the rest aside for another use.

Add the melted butter, evaporated milk, sugar, spices, vanilla, and egg. Use the mixer to mix gently until everything is combined.

Gently unroll the pie crust, and place into a 9-inch pie dish. There’s no need to grease the pie dish first.

Use your fingers to gently flute the edges of the crust. You can also use a fork to create a pattern instead.

Serve with whipped cream and a dusting of cinnamon on top.

Can I make sweet potato pie ahead of time?

You can make Sweet Potato Pie up to 2 days in advance. Store it in the refrigerator, with foil on top. You can either serve it cold, or let it come to room temperature.

Store sweet potato pie either at room temperature for up to 24 hours, or in the refrigerator for 5–7 days. Make sure to cover it before storing.

You can freeze the baked pie, tightly wrapped in aluminum foil and sealed in a resealable freezer bag, for up to 2 months.

Let the pie defrost at room temperature for 24 hours before serving.

How to make homemade whipped cream

Whipped cream on top of sweet potato pie is a MUST!

In the bowl of a stand mixer (or use a hand mixer), place 1 cup of heavy cream, 1 tablespoon powdered sugar, and a splash of vanilla. Beat on high until soft peaks form. Store in the refrigerator until ready to serve it with the pie.

It’s similar in taste. This sweet potato pie is a little lighter and fluffier than a traditional pumpkin pie. It’s also lightly spiced to let the natural flavor of the sweet potatoes shine through.

Can I use brown sugar instead of white sugar?

Yes—substitute ¾ cup of brown sugar for the 1 cup of white sugar.

Can I use a homemade pie crust?

Yes! Use the pie crust recipe from my Fresh Peach Pie.

Why does my sweet potato pie seem runny in the middle?

The pie will still jiggle in the middle slightly when you take it out of the oven. It’ll firm up as it cools. 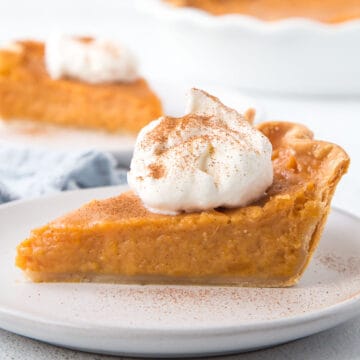 You can replace the white sugar with ¾ cup of brown sugar if you’d like.  Want a homemade pie crust? Use the pie crust recipe in my Fresh Peach Pie.  Make a homemade whipped cream for the top by beating together 1 cup of heavy cream, 1 tablespoon powdered sugar, and a splash of vanilla until soft peaks form. A hand mixer or stand mixer is the fastest way to make it!  Make it ahead: bake the pie, let cool, cover and refrigerate for up to 2 days.  Freeze it: wrap the baked and cooled pie tightly in foil, then place in a resealable freezer bag. Freeze for up to 2 months. Defrost for 24 hours at room temperature.