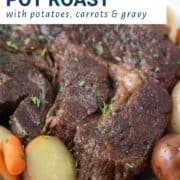 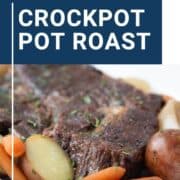 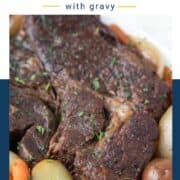 Dinner cooks itself with this easy recipe for Crockpot Pot Roast with Gravy. The roast is tender and juicy, and you can make the gravy in just 5 minutes.

Easy crockpot meals are a staple at my house, and this Crockpot Pot Roast with Gravy recipe is one of them.

I love a recipe where I can throw everything into the crockpot at cook it (like this Beef Stew with Onion Soup Mix).

This recipe is also one of those, but with one extra step: browning the chuck roast in a skillet first.

Browning the chuck roast first adds even more flavor to this amazingly simple dish. The combination of red wine, beef broth, thyme, and rosemary create a rich sauce for the pot roast, which we’ll use to make gravy.

The gravy is thick and smooth, thanks to a classic, fool-proof method that I’ll share below (you can also skip to the recipe card to get it).

If you’re not a gravy person, you can just spoon the juices from the crockpot over the meat for an equally as delicious dish.

If you love a saucy beef recipe, don’t miss my Beef Stroganoff with Cream of Mushroom Soup!

How to make pot roast in the crockpot

Start by seasoning the chuck roast with salt and pepper. Heat the oil in a large skillet over medium heat.

Add the chuck roast and cook for 4–5 minutes, or until nicely browned.

Flip and cook for another 4–5 minutes or until browned on the other side.

Transfer the roast to the crockpot, and add the onion, carrots, thyme, rosemary, red wine, and broth.

Cover and cook for 3 hours on high or 6 hours on low.

The chuck roast should be fork tender, which means it falls apart relatively easily when you try to separate the meat with a fork.

Remove the roast and place it on a serving platter. Tent with foil to keep warm.

How to make gravy for pot roast

Ladle out 1½ cups of liquid from the crockpot. I suggest ladling it into a gravy separator, or a glass measuring cup works, too.

Let it sit for a few minutes to allow the fat to rise to the top.

Pour the juices (but not the fat) into a small saucepan. A little fat is ok though!

Bring the juices to a boil on the stovetop over medium-high heat.

Meanwhile, combine the flour with ⅓ cup water in a jar with a tight-fitting lid. Shake to combine.

When the juices come to a boil, whisk in the flour mixture. Cook, whisking occasionally, until the mixture is thickened, about 2 minutes.

Remove the carrots and potatoes from the crockpot, and put on the platter next to the roast. Serve the Crockpot Pot Roast with gravy.

If potatoes are cooked for really long periods of time (such as 4 hours), they become mushy. To achieve perfectly cooked potatoes, add them one hour on high or two hours on low before the roast is done.

What type of potatoes are best for pot roast?

Red potatoes or Yukon Gold potatoes are best for a pot roast. Cut them into 1–2 inch pieces before cooking if they are large.

How many hours does it take to cook a pot roast in the crockpot?

A pot roast (chuck roast) will generally be tender after 4 hours on high or 6–8 hours on low. If the roast is still not tender after that time, give it another hour to cook.

What the best cut of beef for pot roast?

Chuck roast is the best beef cut for pot roast. It will be very tender after low and slow cooking.

Can I cook pot roast in the oven?

How do I know when pot roast is done?

Pot roast should be fall-apart tender when it’s done. To check, use a fork to try to separate the beef roast. If it separates easily, it’s ready to eat.

Why is my pot roast tough?

It didn’t cook long enough. A 3 pound chuck roast, for example, should cook for at least 4 hours on high or 6–8 hours on low in the crockpot.

Leftover pot roast can be stored in the refrigerator for up to four days.

To freeze pot roast, let the roast cool completely. Place the roast, vegetables, and juices in a large freezer-safe dish. Freeze for up to 2 months.

Defrost in the refrigerator for 48 hours. Reheat on the stovetop, in the crockpot, or in the microwave until hot throughout.

This Crockpot Pot Roast with Gravy is delicious on its own, or you can serve it with any of these side dishes to soak up the juices/gravy:

I like serving a green veggie on the side too, such as Garlic Roasted Broccoli or a leafy green salad. 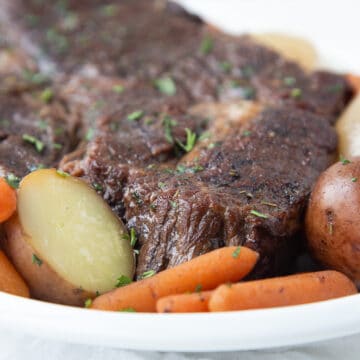 The pot roast should be fork tender when it’s done. If the roast doesn’t fall apart easily when you stick a fork in it, cook it for another hour on high.  You can use fresh herbs instead of dried, if you’d like. Double the amounts if you are using fresh herbs. You can also substitute Yukon Gold potatoes for the red potatoes. Cut them into 1–2 inch pieces if they are large. You can also make this recipe in the oven instead of the crockpot. Cook it for 3 hours at 300°F.