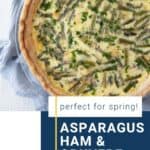 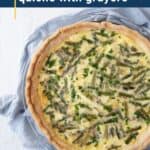 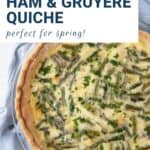 This quiche is packed with all the good stuff: fresh asparagus, chopped ham, and melty gruyere cheese. It’s made with store-bought pie crust to make it even easier!

Ham and scalloped potatoes have been on our family’s Easter menu since…forever. I love a good fire glazed ham, but this Easter, I’m serving brunch instead.

The three are suspended in the perfect ratio of eggs and half & half to create a light and fluffy custard.

And of course there’s the crust. It’s nothing extraordinary (in fact, it’s store-bought), but it does the trick just perfectly.

How to make a crust for a quiche

For this quiche, I wanted to save time, and refrigerated pie crusts are so easy.

You’ll need one refrigerated crust (there are typically two per box). Save the other crust for another quiche. You can either double this recipe or you can freeze it for later use.

In order for the crust to be golden brown and cooked underneath, you need to par-bake the crust. That just means that you’re giving it a head start in the oven. I baked the crust for 10 minutes at 425°F to par-bake it.

How to prevent crust from falling

There’s a tricky thing about pie crust. It easily shrinks and slides down the edges of a pie dish.

The key is to make sure that the crust is sitting on the lip of the pie plate. If your pie plate is too big or too deep, it won’t do that.

Mine is a 9-inch pie dish

I folded the edge of the crust in toward the center and let it sit on the edge of pie plate. This helps hold it in place while baking.

There are two more secrets to ensure a successful par-bake of the crust:

Once the crust has cooked, it’s time to add fillings!

First, sauté the asparagus in a little bit of butter.

Then, grate the gruyere and chop the ham.

When layering it into the crust, start with the gruyere, then top it with the ham and asparagus. The layer of gruyere prevents the crust from getting soggy.

Next, whisk together the eggs, half & half, salt and pepper. Pour them over the fillings in the crust, and place the dish in the oven for 40 minutes.

Give the quiche a little jostle when you’re checking it in the oven. Once it no longer jiggles in the middle, it’s ready.

This recipe is super adaptable. I chose asparagus, ham, and gruyere, but you could choose any veggie, meat, and cheese that you like!

Swap any of the above for the asparagus, ham, and gruyere, and you’ll have a delicious quiche.

Asparagus, Ham, and Gruyere Quiche serves 6–8 guests. For lunch, it’s delicious with a side salad and a hunk of French baguette.

For brunch, I love serving a combination of sweet and savory dishes. Since this quiche lands in the savory camp, Cherry Coffee Cake or Overnight French Toast Casserole are both great pairings.

A German Pancake with Apples is another good one!

Don’t skip baking the crust before adding the quiche ingredients—it’ll ensure that the crust isn’t soggy! The recipe was updated in March 2021 to reflect a longer cooking time (40–50 minutes, instead of 40 minutes).