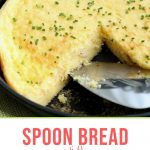 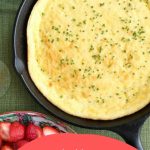 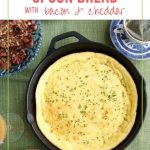 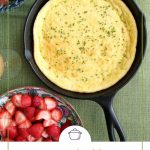 Bacon Cheddar Spoon Bread is a cross between cornbread and a soufflé. It’s simple yet impressive, and perfect for brunch.

Spoon bread is (wait for it)…cornbread that you eat with a spoon. It’s made with cornmeal and whipped egg whites, so it’s similar in flavor to cornbread but has a lightness that’s similar to a soufflé.

This Bacon Cheddar Spoon Bread is a flavor-packed version of a typical spoon bread recipe, amped up with crispy bacon pieces, sharp cheddar, and chives.

It’s a fun dish for brunch and it pairs perfectly with Praline Bacon and Banana Bread French Toast Casserole.

What is spoon bread?

Research is conflicted on the origins of spoon bread. Some historians point it back to Native Americans porridge. It was also thought to be a staple during the Revolutionary War.

, notes in his book that “Spoon bread is simply a very rich and dense cornbread, a dish so dense that it must be served up with a spoon. General Washington loved this dish, and it was apparently served quite often at Mount Vernon (Washington’s plantation).”

How to make spoon bread

. Mine is 10 inches in diameter. This helps the spoon bread pull away from the dish easily, and it’ll have a delightful light brown bottom courtesy of the butter.

Then, place the cornmeal, milk, and salt in a saucepan over medium heat. Cook for 5 minutes, or until the mixture is thickened slightly.

Meanwhile, place the egg whites in the bowl of a stand mixer. You could also use a hand mixer

here. Take care not to get any yolks in the bowl, as they will impede the whites from whipping up nicely.

Whip the egg whites to soft peaks, which basically means that they form a soft (not stiff) peak on the end of the whisk attachment.

Whisk the egg yolks and baking powder into the cornmeal mixture, then fold in the egg whites gently with a spatula. Stir in the cheddar and crumbled bacon, then pour it into the buttered cast iron skillet.

Bake for 35–40 minutes, or until the top is golden brown.

When it comes out of the oven, it’ll be nice and puffy! Over the course of a few minutes, it’ll sink a little like the one shown here. That’s normal—every spoon bread will do that. Sprinkle with chives and serve!

My egg whites won’t whip up high. What did I do wrong?

Egg yolks are the enemy of whipped egg whites. Carefully separate the egg whites from the egg yolks before whipping the egg whites, taking care not to get any traces of egg yolks into the whites. Then, whip the whites with a stand mixer or hand mixer.

My spoon bread deflated after I took it out of the oven. What happened?

This is normal! The spoon bread will deflate slightly after baking. Sprinkle on some chives to distract your eyes. 🙂

Can I leave out the bacon?

You can make this recipe without the bacon.

Can I use another type of cheese?

Bacon Cheddar Spoon Bread is best served right after it’s made. You can store any leftovers in the refrigerator and reheat slices in the oven for 5–7 minutes, or until heated through.

I don’t recommend freezing spoon bread, which will compromise its texture.

What to serve with spoon bread

While spoon bread is usually a side dish served with dinner, I served the Bacon Cheddar Spoon Bread as part of a Southern-inspired brunch with my friend Kelley of Haviland Events.

She supplied the gorgeous china and dishware that you see here. The dishes are known as chinoiserie, which is a European interpretation of Asian art. It’s the perfect dishware for brunch—so colorful, festive, and fun! 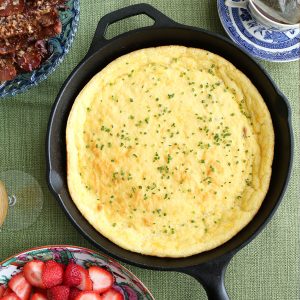 here. It will help the bottom of the spoon bread turn golden brown and get lightly crispy.