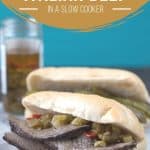 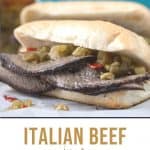 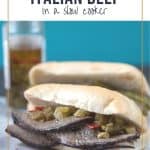 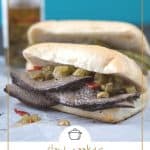 Crockpot Italian Beef Sandwiches are an easy way to enjoy an iconic Chicago sandwich at home! The meat is tender and juicy, and perfect for piling on a big squishy roll.

Crockpot Italian Beef Sandwiches are an easy-to-make version of a classic Chicago sandwich. The beef is tender and dripping with juice, the rolls are soft and squishy, and the peppers are to your liking—mild or spicy.

It starts with a sirloin tip roast, and a crockpot is the perfect cooking method. The meat is quite lean, and with the broth at the bottom, the crockpot basically steams the meat until it’s done. It results in a moist, tender roast.

Portillo’s, an iconic, always-busy sandwich shop in Chicago and its suburbs, is known for its Italian beef sandwiches. They are served piping hot on the softest French bread, and presented with gravy (au jus) for dipping.

When ordering, there are two options for the sandwich: with homemade roasted sweet peppers, or with spoonfuls of spicy giardiniera.

You can also order it “dry” (with very little juice) or “dipped”, where they dunk the entire sandwich in the gravy.

We’re creating those options here, with green peppers cooked in the au jus, a side of spicy giardiniera for the spice lovers, and lots of au jus for dipping.

According to my copy of The Chicago Food Encyclopedia

They were served at “peanut weddings”—weddings where Italian American families rented out a big hall and made their own food for the event: roasted peanuts and sandwiches with wet roasted Italian beef.

Since there were often hundreds of people in attendance, the hosts would take the beef to a local bakery to cook it in their large-capacity ovens. And the same bakery would supply the bread for the sandwiches.

Soon after, beef stands emerged on Taylor Street on Chicago’s near southwest side. After World War II, they became even more prolific.

They now dot numerous Chicago neighborhoods, offering sandwiches, french fries, and in Portillo’s case, an entirely un-Italian treat called the Chocolate Cake Shake. It’s a milkshake with an entire slice of chocolate cake blended into it. And it’s delicious.

What is a sirloin tip roast?

A sirloin tip roast is a lean cut, from the front end of the rear leg. It is flavorful, but due to its lean nature, it is best when braised. It also makes great kabobs (like these Italian Marinated Steak Kabobs).

Place the stock and the sirloin tip roast in a slow cooker. Sprinkle the herb and salt mixture over the top.

30 minutes before the roast is done, add the peppers to the slow cooker.

Remove the roast and place it on a cutting board. Let sit for 10 minutes, then remove the netting (if the roast has netting on it) and slice the roast into very thin slices.

Without a commercial deli slicer, it’ll be difficult to get it into paper thin slices like the restaurants do. It doesn’t have to be perfect, but get it as thin as you can using a sharp knife. (I love my Furi Santoku knife

Then the Crockpot Italian Beef Sandwiches are done!

A word about crockpots (also known as slow cookers): the newer models run HOT. I had a slow cooker that was about 10 years old. I could consistently cook a roast for 4–6 hours on low or 8–10 hours on high.

We got a new slow cooker in 2017, and suddenly roasts are done after 4 hours on low. Apparently slow cooker manufacturers were worried about meat being at an unsafe temperature for hours at a time, so they cranked up the settings by 20°F of so in recent years.

So just a word to the wise—know your slow cooker!

Why does a sirloin tip roast have netting on it? Should I remove it before cooking?

The netting on a roast holds the meat together when cooking. Remove the netting AFTER the roast has finished cooking, before slicing the roast.

Can I make Italian beef sandwiches ahead?

If you are serving the Italian beef sandwiches within a few hours of cooking, slice the beef and place it back into the au jus in the slow cooker. Turn the slow cooker to warm. The beef will be at the perfect temperature for serving.

Can I freeze Italian beef?

To freeze Italian beef, let the meat cool and transfer to a freezer-safe dish, along with the juices. Freeze for up to 2 months. Defrost overnight in the refrigerator and reheat in the microwave or in the crockpot.

Crockpot Italian Beef Sandwiches are perfect for a crowd. The beef can be held in the crockpot for hours after you’ve sliced it (set the crockpot to warm), making it ideal for a cozy afternoon with family or friends.

You can serve the sandwiches straight from the crockpot in big, soft French rolls (I use Turano brand). Top them with either the sweet green peppers, or with spicy giardiniera.

Serve them with a small cup of au jus for dipping the sandwich. Small ramekins are perfect for this.

Classic Chopped Salad is the perfect side dish, along with a pint of beer.

While we’re talking beef in the crockpot, don’t miss these easy recipes!

And don’t miss this recipe for Old Fashioned Sloppy Joes, too! 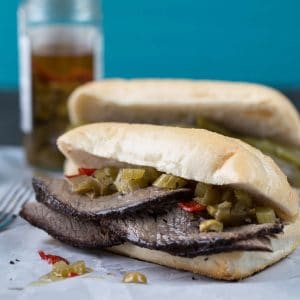 If your sirloin tip roast has netting on it, keep the netting on until after the roast is cooking. If not serving immediately, you can place the sliced beef back into the slow cooker with the au jus. Set the slow cooker to warm until ready to serve.

« What is Hospitality?
Italian Chopped Salad with Red Wine Vinaigrette »