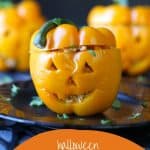 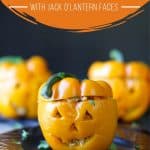 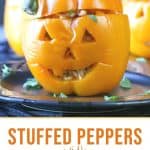 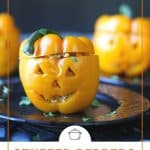 You just need a paring knife to carve jack o’lantern faces into bell peppers to create these Halloween Stuffed Peppers!

Growing up, there was so much excitement surrounding Halloween. Figuring out my costume and the best route for trick-or-treating consumed the weeks before October 31.

Now, I prefer to spend my time crafting a festive menu to celebrate. And these Halloween Stuffed Peppers are the perfect dinner before the trick-or-treaters arrive.

All you need is a small sharp knife (such as a paring knife) to carve the faces into the orange bell peppers.

This particular recipe is Southwestern, but the jack o’lantern technique works with Old Fashioned Stuffed Bell Peppers and Italian Stuffed Peppers, too.

How to carve jack o’lanterns into bell peppers

You’ll want to carve the peppers before cooking, and even before cutting the top off. Otherwise, they’ll be too soft or flimsy.

I used my sharpest paring knife and it took about 15 minutes to carve four peppers once I had the technique down.

To carve the peppers, use a pen to draw your desired shapes onto the bell peppers. Then, use a paring knife to carve on the outside of the pen markings.

You could also use a pen with edible ink

(they’re fun for decorating fondant or confections made with candy melts, too.)

Or if you’re really talented, you could just carve them freehand!

Discard the pieces that you’ve cut out, and the peppers are ready for stuffing!

Place the carved peppers in a microwave safe dish and fill the bottom with a thin layer of water. The water will help the peppers steam—no need to put a lid on the dish.

Microwave the peppers for 4–5 minutes, or until nearly soft. The peppers will lose a little bit of their vibrant color, but that’s ok—they will still be orange!

1. While you are carving the peppers, cook the rice according to package directions.
2. Sauté the onion and jalapeño in olive oil, then add the ground turkey and sauté until cooked through.
3. Add the cumin, salt, salsa, cooked rice, corn, and half of the cheese. Stir to combine.
4. Fill the peppers with the stuffing, dividing it evenly among the 4 peppers.
5. Sprinkle the remaining cheese over the top, then bake for 5–7 minutes, or until the cheese has melted.

Serve Halloween Stuffed Peppers sprinkled with fresh cilantro for a pop of color and flavor.

Can I make Halloween Stuffed Peppers ahead of time?

You can make the stuffed peppers up to 24 hours in advance. Cover and refrigerate until you’re ready to serve them.

When you’re ready to serve, cover with foil and place in a 350°F oven for 20–25 minutes, or until heated through. You can also microwave them.

Can I make these stuffed peppers vegetarian?

Yes! Instead of ground turkey, add one can of rinsed and drained black beans. They fit perfectly with the southwestern flavors. You could also just omit the ground turkey.

Can I make these with ground beef?

Yes! Use 1 pound of ground sirloin (90% lean) instead of the ground turkey.

Side dishes for stuffed peppers

Here are a few side dish ideas!

I hope your little (and big) ghouls and goblins enjoy these! 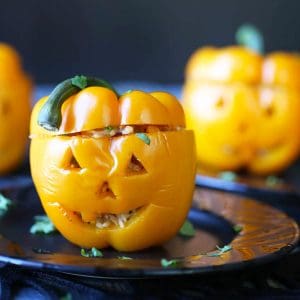 Use an edible ink pen

to trace the faces first, if you wish!  You can substitute ground beef for the ground turkey.