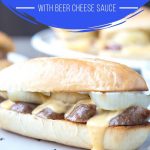 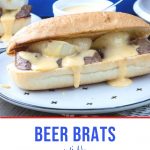 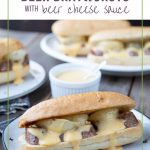 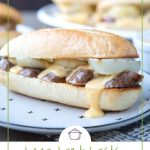 It isn’t summer without beer brats! This step-by-step guide will show you how to cook beer brats with cheese sauce entirely on the grill. They’re perfect for a cookout!

Isn’t the smell of grilling the BEST? I love walking around on a summer weekend and getting hit with the aromas of charcoal grills throughout the neighborhood.

This recipe for Beer Brats with Cheese Sauce has a traditional cooking method, and a slightly untraditional serving method.

The traditional cooking method involves cooking the brats in a beer bath on the grill, and then transferring them to the grill itself to finish cooking and get nice char marks.

The untraditional method is how the brats are served: sliced instead of whole. The slices of bratwurst on the bun make lots of nooks and crannies for the beer cheese sauce to ooze into. The whole thing is irresistible!

Thank you to Kingsford Charcoal for the use of this recipe from their Taste of the Game cookbook.

Since the flavor of the beer comes through when cooking the brats, you’ll want a mild tasting beer. Lagers usually work best. Those include varieties like Miller Lite, Budweiser, Coors Light, and Stella Artois.

You can use whatever you have on hand though, with a few exceptions. I would advise against using any flavored beers (like coffee stout) or any beers that are particularly hoppy. The hops will lend a bit of a bitter flavor to the brats which we don’t want.

For this recipe, everything is cooked on the grill—even the cheese sauce. Hooray for minimal kitchen clean-up!

How to cook beer brats on the grill

I used a small amount of lighter fluid to light the coals, and contrary to some opinions, I don’t think you can taste it in the food. It burns off within minutes of lighting the grill.

Next, use a metal saucepan to make the beer and cheese sauce. Almost any metal pan can be used on the grill (just make sure it’s all metal and doesn’t have a silicone or plastic handle).

The sauce is seriously delicious—I definitely dipped some pretzels into the sauce while the brats were cooking! 🙂

Next, cook the bratwursts in a beer bath over indirect heat. I used a foil pan for this to make clean-up even easier. While the brats are cooking in the beer, grill the onion slices over direct heat.

Then, the brats and onions switch places: the brats go directly on the grill and the onions get a bath in the beer. Both the onions and the brats get a smoky, wood-fired flavor thanks to the charcoal.

You can also grill the buns briefly, cut side down. Grill marks = more flavor!

And can we talk about that cheese sauce? It oozes out of the sandwich and pairs perfectly with the grilled brats and onions.

You can make the cheese sauce ahead of time, refrigerate it, and then reheat it when you’re ready to serve. Give it a good whisk when reheating it so redistribute the ingredients.

You can also make the beer brats ahead of time. After cooking the brats in the beer bath, remove them from the beer and refrigerate. When ready to serve, reheat the brats directly on the grill.

How to make beer brats on the stovetop

No grill? No problem! You can easily make beer brats on the stovetop.

Place 1 tablespoon of butter, then the brats in a large skillet with sides. Heat over medium heat for 3–4 minutes, until the brats are light brown on the bottom.

Flip the brats and add a bottle or can of beer. Bring to a boil, then reduce to a simmer. Cover and let cook for 20 minutes.

You can also add thinly sliced onions while adding the beer. They will cook along with the brats.

What to serve with brats

I often grill brats in the summer, and this recipe is a great way to elevate the meal and impress your family and/or guests. They would be great paired with German Potato Salad and Grilled Corn Salad. Tuna Pasta Salad is another great pairing.

A pitcher of Homemade Ginger Ale would be perfect for enjoying with the meal. 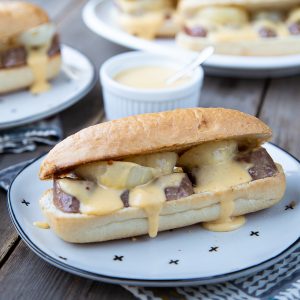 For the cheese sauce:

For the beer brats:

For the cheese sauce:

For the beer brats:

For the cheese sauce, make sure that your saucepan is entirely metal, with no plastic or silicone parts that could melt on the grill. To make clean-up even easier, use a foil pan for the beer bath. The cheese sauce can be made ahead, and reheated either on the grill or on a stovetop. Store it in the refrigerator until you’re ready to use it, and whisk it well when reheating it to reincorporate all the ingredients. The nutrition facts include all ingredients, including using all of the cheese sauce. You will likely have cheese sauce leftover, however.