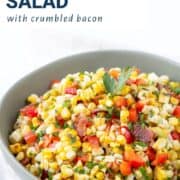 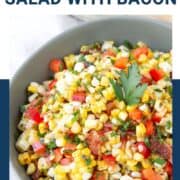 Grilled Corn Salad is packed with summer flavor, and it’s ready in less than 30 minutes. Serve with grilled burgers, kabobs, or a juicy steak!

Grilled Corn Salad with Crumbled Bacon is a great way to enjoy grilled corn without it getting stuck in your teeth!

The combination of grilled corn, bacon, bell pepper, and fresh herbs is irresistible. And, it’s a great side dish for cookouts or picnics.

This salad is best made with sweet corn that’s in season.

When is sweet corn season?

How to grill corn

Preheat the grill to medium-high heat. Remove the husks and silks from the ears of corn.

Place the corn on the grill, close the lid, and grill for 2–3 minutes, or until grill marks appear. Flip and cook for another 2 minutes.

You just want a light char here—enough for grill marks to show up but not enough to overcook the corn so it’s mushy.

How to make grilled corn salad with bacon

As the corn is cooking and cooling, prepare the rest of the salad:

1) Cook the bacon in a skillet. Remove to a paper towel lined plate and let cool.

3) In a jar with a tight fitting lid, combine the olive oil, vinegar, honey, and sea salt. Shake to combine.

You can make Grilled Corn Salad up to 8 hours in advance of serving. Leave out the bacon, and stir it in right before serving.

After making it, cover and refrigerate until you’re ready to serve. And set aside the crumbled bacon for stirring in later.

You can serve it either cold from the fridge or at room temperature.

Can I use different herbs?

Yes! You can use just basil, just parsley, or substitute other fresh herbs such as chives or thyme.

Can I substitute frozen corn?

You can substitute 3 cups of frozen corn for the corn on the cob. Instead of grilling it, sauté the frozen corn in one tablespoon of butter for 5–6 minutes, or until soft.

What to serve with grilled corn salad

Grilled Corn Salad with Bacon is perfect for a cookout, so grilled burgers, grilled bratwursts, or grilled sausages are delicious pairings.

I’m partial to these Beer Brats with Cheese Sauce or these Grilled Brats with Tomato Jam.

German Potato Salad would be the perfect side dish (it also contains bacon!).

Grilled chicken would also be a fantastic pairing. These easy Greek Chicken Kabobs are a favorite at our house.

And if you have some extra corn, don’t miss this Cream Cheese Corn Dip for an appetizer! 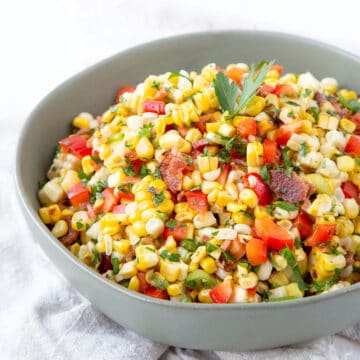 This is best served soon after making so the bacon stays crisp. You can make it ahead, however. Leave out the bacon but prepare the rest of the salad, and refrigerate it until you’re ready to serve it. Just before serving, stir in the bacon. You can substitute 3 cups of frozen corn for the corn on the cob. Instead of grilling it, sauté the frozen corn in one tablespoon of butter for 5–6 minutes, or until soft.