These twice baked potatoes are a delicious cross between spinach artichoke dip and a stuffed potato. They’re easy, cheesy, and perfect for a weeknight meal!

I’m a big fan of spinach artichoke dip. These Spinach & Artichoke Stuffed Potatoes take it to another level. They’re a cross between a twice baked potato and the beloved dip, and they were a hit at my dinner table.

Most twice baked potatoes are stuffed with cheese and bacon. I am all about that! But these take another turn, and sub the usual spinach artichoke dip ingredients (sour cream, cream cheese, artichoke hearts, baby spinach) for the cheese and bacon.

They’re a delicious side dish for steak or chicken. They’re also hearty enough to be served on their own for lunch or dinner. You can even add chopped chicken, if you’d like!

First, rub the russet potatoes with olive oil and salt. Place them on a sheet tray and bake for 50–60 minutes, or until a fork can easily be inserted into the center.

If you’re cooking multiple recipes at once, this is a great time to take advantage of the hot oven. When something is cooking for that long, I usually use the opportunity to throw in a few more things, like roasted garlic for this Roasted Garlic Mashed Cauliflower.

Let the potatoes cool for 10 minutes so they’re easier to handle. While they cool, wilt the spinach in olive oil in a large skillet.

Place the sour cream, mayonnaise, cream cheese, and ¼ cup milk in a large bowl. Scoop out the insides of the potatoes, leaving ¼ inch edge on the potato skin.

Place the insides of the potatoes in the large bowl with the sour cream and other ingredients. Mix on low with a hand mixer until creamy and smooth. Fold in the artichoke hearts, spinach, ½ teaspoon salt, and half the parmesan cheese.

Sprinkle the potato skins with salt, then divide the spinach artichoke mixture evenly among them. Sprinkle with the remaining parmesan cheese.

Bake for 10–15 minutes, or until the cheese is melted and the potatoes are warmed through. Serve immediately as a side dish or on their own.

What to do with leftover artichoke hearts

A quick confession: this recipe uses half of a can of artichoke hearts. That’s annoying. I hate using half a can of something, because the rest will sit in my fridge until I throw it out.

So use up those extra artichokes! They are delicious chopped up in a veggie omelette. They are delightful on pizza. They are a great addition to this Marinated Vegetable Salad. And I love them in a fettuccine alfredo.

I love serving Spinach Artichoke Stuffed Potatoes with a big salad. This Winter Fruit Salad would be a great accompaniment.

Roasted veggies, like Bacon Brussels Sprouts, would be delicious, too! 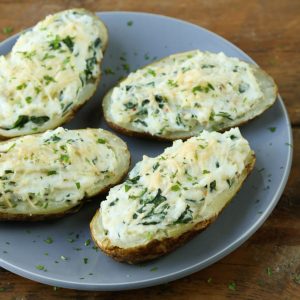