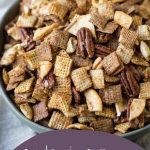 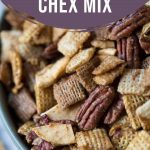 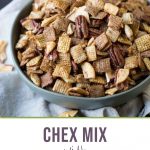 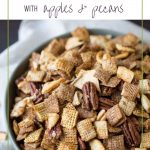 This sweet Apple Cinnamon Chex Mix recipe is filled with warm flavors of cinnamon, brown sugar, and ginger. Whip up a batch and watch your guests devour it!

The aroma from the oven while it’s baking is mouthwatering, and it’s delicious with a bottle of beer or hard cider. We love it for watching football games in the fall, but it’s delicious anytime of year!

Preheat oven to 250°F. Place the Chex and pecans on a large baking sheet. I like to line the baking sheet with a silicone mat

to prevent the mixture from sticking to the pan.

Then, combine the butter, brown sugar, and corn syrup in a medium saucepan over medium heat. Cook until the butter melts and the sugar is dissolved.

Stir in the baking soda, cinnamon, ginger, and salt. The baking soda will cause the mixture to foam a little bit. That is a good thing!

Pour the syrup over the Chex and pecans, and stir to coat.

You can make Apple Cinnamon Chex Mix several days in advance of serving it. After it cools completely, store it in an airtight container at room temperature until you’re ready to serve.

How can I make Chex Mix gluten-free?

Traditional Chex Mix calls for Corn, Rice, and Wheat Chex. To make the mix gluten-free, omit the wheat Chex and add more corn Chex and/or Rice Chex. As always, check any additional ingredient labels for gluten (which will be labeled as “contains wheat”).

Beer and hard cider complement the flavors of Chex Mix nicely. A beer and a bowl of Chex mix on the couch, while watching football, sounds pretty nice!

This mix is SUCH a great party snack. I’ve made it several times now, along with a savory Chex Mix, for get-togethers.

It’s an excellent dinner party snack while the food is cooking. It’s perfect for football watching or guys’ nights—it tastes great with beer or hard cider.

I’ve served it alongside Sweet & Spicy Baked Wings, Boozy Bacon Wrapped Dates, and Pigs in a Blanket. They’re all handheld appetizers that get gobbled up! 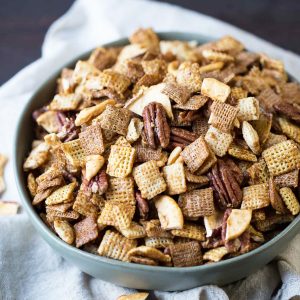 You can use any combination of Wheat Chex, Corn Chex, and Rice Chex that you like. I prefer to use an equal mixture of all three for the color and flavor variety in the mix. If you want to make this gluten-free, omit the Wheat Chex and use an equal mixture of Corn Chex and Rice Chex instead.  Why add the apple chips at the end? They will get rock hard in the oven. They’re already dried so baking dries them out even further! Add them at the very end, after the mixture has cooked (it’s ok to add them when the mixture is still warm).